By Kevin O'Cuinn on May 4, 2017 in Short Fiction • Illustrated by Bojana Dimitrovski 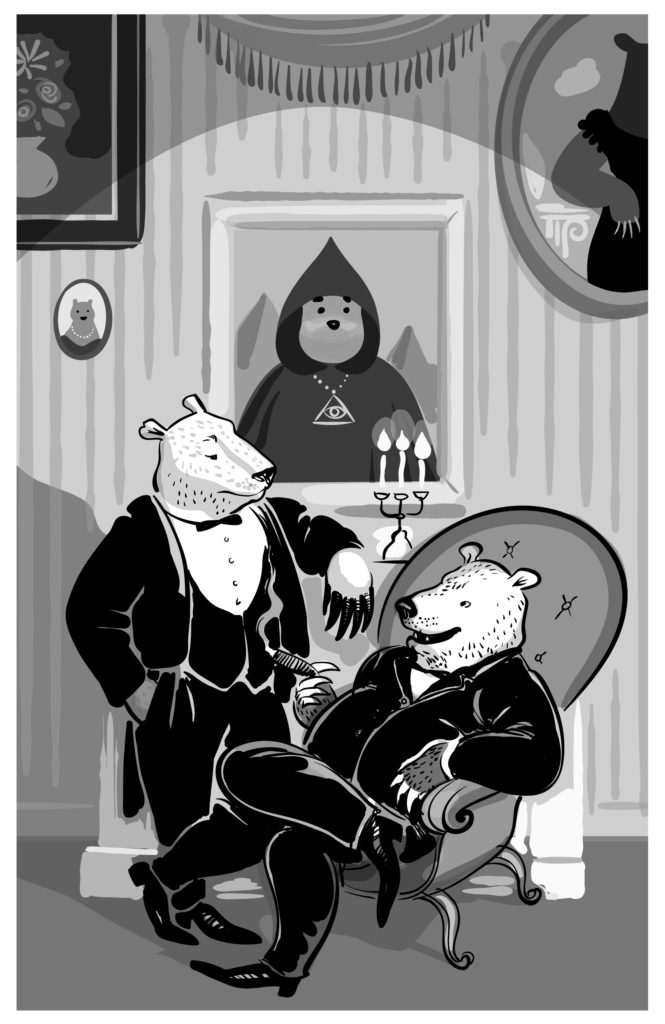 Let me explain: it’s a grolar-pizzly, and applesauce to those who say it’s “a product of necessity or opportunity” because all that matters is it exists. Yes, grizzlies and polar bears interbreed regardless of the 0.0001 per cent divergence in their DNAs, just so long as the mate is a bear — you won’t find a bear getting it on with a llama just because a llama is up for getting down. Wolphins and zonkeys and ligers may be cute and fascinating, but when it comes to bears: no funky hybrids. Best we keep it in the family.

Well, cousins mating is perfectly acceptable in most dens, sir. And actually, I find the term inbred offensive. If you could just not use it, that would be splendid.

The novel is not in crisis. I don’t buy into that. It may be a doxy, a wanton strumpet, a debauched, rakish trollop-harlot, but it’s not, for example, the euro. Nothing dystopian is going down, there are no ulterior Prussian motives. It isn’t in meltdown; there are no wolves in the river awaiting the salmon’s leap. The novel is fine, relax. But here’s the thing: there just aren’t enough bears in the novel. In fact, there is a distinct lack thereof in just about every novel ever written. Yes, there are exceptions, some notable, but to name even one of them is to divert attention from the myriads that fail to bring it. And — like it wasn’t bad enough — where a novel does have Ursidae references, it’s dismissed as genre, or as literary fiction’s crack-smoking, low-life cousin; a degenerate that wears wife-beaters and feeds on its young. It’s just not right.

China to overtake the US? I imagine you mean China is going to generate more dollars. Well, if we assume that the New American Dream is in fact the Chinese Dream, it is most probably due to the huge amount of bear bile that China ingests. As Theodore recently mentioned to the Senate, in China, bear bile — extracted via a catheter — and bear gallbladders fetch more per gram than gold. It’s never pretty when hokum and business hook up. Let’s all just pause for a moment of prayer. Dear Mother Bear, Ursa Major, please bring solace to our brothers in China, all ten thousand of them held in despicable, degrading captivity on “bear farms.” Great Mother, we implore you.

I am all in favour of Twitter. Whoever would have thought that so many folk had so much to say? All walks of life, just give them an Internet connection and whammo, their excrement is zipping around the ether in a hundred and forty characters or less. Personally, I have yet to grasp the importance of the hundred and forty, but what I will say is this: not one bear has ever said anything stupid on Twitter.

Hibernation in Europe or a new dawn? The UK has voted to invoke Article 50 of the Lisbon Treaty and exit the EU. But will they? Dare they? Plus, consider the changes afoot in the UK itself: Wales and Scotland to secede from their historical stew with England. Farewell, Your Majesty. Up yours, Britannia. All that red stuff dropping off the atlas! What a mess. Sure, Northern Ireland remains a moot point but who didn’t see that coming? It’s all coming apart, mark my words. Will we see the return of the freemen to the shire? Hmm. The keen eye will no doubt realize that there is much more to all of this separation and decay than at first apparent. Well, is it really just a coincidence that bears have been extinct in Britain for over a thousand years? I ask you, is it?

Part of the problem of there not being enough bears in a literal, metaphorical, figurative or spiritual sense relates to how they are represented in the movies. The low point for me was Baloo losing his thunder to the man-cub and doing cabaret, but there’s more. Just consider how many movies actually concern our kind. The Bad News Bears had no bears in it. The Care Bears were stuffed with who knows what. And as for Pooh, any bear worth his honey knows he is a fabrication of the Illuminati, soma to keep us in our caves fearing Heffalumps, or down by the river playing Poohsticks.

Koala bears aren’t bears, they’re marsupials, and I’ll keep on saying it till someone listens. Marsupials are creatures of a kangaroo-type with a pocket into which — forget it, you know this. My point is that we spend our lives believing and accepting stuff just because some idiot tweets it. I love a conspiracy theory as much as the next bear.

If it was 1990 again and I had ten thousand dollars, I’d invest in all those funky organic beverages containing ginger and lychees. But keep in mind that we bears recycle our feces into renewable energy. Genius. Not for us to defecate and suffocate in the fumes! Sustainable bear energy is the future — not our bile or our claw clippings. Bank on it. Plus, of course, our charm and general level of cuteness. I’ll bet the contents of my cave on it. Sustainable bear energy is the next big thing. It’s going to bigger than tupelo honey. Cheers.

Kevin O'Cuinn is living and loving in Frankfurt, Germany. he comes from Dublin, Ireland, and is fiction editor at the mighty Word Riot.
View all posts by Kevin O'Cuinn →
Feathertale nominated for two National Magazine Awards
Us Organizers