By Richard Kelly Kemick on August 17, 2018 in Short Fiction • Illustrated by Katherine Diemert 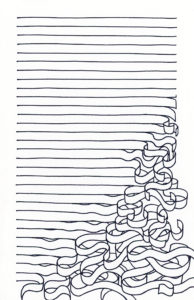 As a writer, most of my notebooks come as gifts from friends that haven’t a sweet clue what to get me for Christmas, or my birthday, or Remembrance Day. Every so often, however, my stockpile runs dry, and I will buy a notebook from Value Village. Since the notebooks are used, they often contain a couple of pages of the plot line to a novel. These plot lines are all, without exception, unfinished. They are also all, without exception, about vampires. The ideas differ a bit, but the skeletons are pretty much the same:

— A teenager is unpopular.

— This person is obviously a vampire to everyone except the protagonist.

— Together they fight Evil (Evil is always capitalized).

— Sometimes there is an animal that must be killed and/or fucked.

The stories drop off at this point, mid-sentence, the author’s boredom practically dripping off the page.

Notebooks are a coveted item at Value Village. Once, I put one down to scratch my head (because I have psoriasis, not because I needed to ponder the purchase) and it was snatched away by an elderly shopper who must have been stalking me, waiting for weakness. Therefore, many other shoppers must be acquainted with these half-loved vampire novels. Perhaps, like me, they have even come to expect them.

When the time came that I had my own notebook to donate to Value Village (why would I want an unlined notebook, Donna?), I penned the following plot into its pages:

— Meets man named Dandelion, who has long teeth and is always telling neighbours

— The two of them get married.

— She runs for the school board.

— Pledges to the Devil that she will do the Dark Lord’s bidding if elected.

— First order of business: kill all the goats.

— The mayor says she can’t do this since she’s only on the school board.

— She kills the mayor.

— Goat move makes her super popular. Everyone hate goats, just too afraid to admit it.

— She moves to make handball a national sport.

— People rebel and she changes her position. Not a flip-flopper, just responding to the people’s needs. Nobody understands handball. It looks simple but, like, when you’re playing, WTF is going on?

— Ghost of goat comes back to haunt her.

— Ghost Goat has natural highlights, an eyebrow ring, and is in a punk band called Couch Snake. He’s also totally ripped. Only goat from waist up. (Or waist down? Whichever is less weird?)

— Devil comes and tells protagonist (is she still without a name?) that Ghost Goat will win.

— Devil says, “My bidding? All I wanted was legislation entrenching the personhood of corporations.”

— She is on her own. She reflects on her life. She misses Dandelion. She almost regrets telling Jared Sidney of St. Francis Junior High School that he is a waste of human skin.

— On the night before naked wrestling handball match, she remembers a short story she read, where an ex-cop sits down beside Eric, who is a robot, and as the two of them watch from their lawn chairs as Mars plummets into Earth, the ex-cop says to his partner, “Tell me everything you know about love.”

Richard Kelly Kemick is originally from Calgary, Alta., a graduate of the University of British Columbia, and is currently studying at the University of New Brunswick in Fredericton. Richard is a reader for QWERTY, was a poetry editor for UBC’s undergraduate writing journal, The Garden Statuary, and has been published by the website, www.reorb.it.
View all posts by Richard Kelly Kemick →
More Death in Etobicoke: The Silence of the Pigeons
Revisionist History